In March this year, US President Joe Biden announced his intention to designate Colombia as a major non-NATO ally. Under U.S. law, the designation of major non-NATO ally provides that foreign partner with certain benefits in the areas of defense, trade and security cooperation, according to the State Department, and is a symbol of the close ties the US shares with such countries.

However, these countries are not entitled to the same security guarantees as full-fledged members of the NATO alliance, as alliance members are not obligated to defend a major non-NATO ally that comes under attack.

Since 2013, NATO and Colombia have engaged in dialogue and cooperation. A second Individual Partnership and Cooperation Programme, signed in May 2019, formalized Colombia’s recognition as a NATO partner and granted access to the full range of cooperative activities available to NATO partners.

NATO staff visited Colombia at the beginning of this month to discuss the prospects of enhanced cooperation between both countries, particularly in the area of defense education, as part of the NATO Defense Education Enhancement Programme.

The NATO team met with counterparts from a variety of Colombian military educational institutions, including the Superior School of War (Escuela Superior de Guerra) and three pre-commissioned military academies for the Army in Bogota, Air Forces in Cali and Navy in Cartagena.

Among the topics discussed were curriculum enhancement, faculty development, English language training and testing in accordance with NATO standards, alongside the development of e-learning systems.

Jairo Garcia Guerrero, Deputy Minister of Colombian National Defense, stated that “it is critical for the Colombian defense education system to establish a cooperative relationship with NATO educational structures in order to share best practices and strengthen educational capabilities related to defense.”

NATO and Colombia are working together to develop common approaches to global security challenges such as cyber and maritime security, terrorism and  organized crime, as well as to support peace and security efforts, including human security.

Colombia provides demining training to NATO Allies and partners through Colombia’s International Demining Centre (CIDES) participation in the network of NATO Partnership Training and Education Centres (PTEC). NATO also supports Colombia in its efforts to build the capacities and capabilities of the Colombian armed forces.

Colombian Vice Foreign Minister for Multilateral Affairs Adriana Mejia, Vice Defence Minister for Strategy and Planning Jairo Garcia, and NATO representatives agreed to expand bilateral cooperation on issues such as interoperability on 22 January 2021 at NATO Headquarters. In January 2021, an agreement on cooperation and information security went into effect.

NATO is also involved in a broader range of security issues confronting Latin America. NATO Deputy Secretary General Mircea Geoană attended the Concordia Americas Summit in December 2020, where political leaders, business innovators and non-governmental representatives discussed how to address the Western Hemisphere’s challenges together. In this context, the Deputy Secretary General emphasized the importance of global partnerships in addressing these issues.

In February, NATO Secretary General Jens Stoltenberg welcomed President Iván Duque of Colombia at NATO HQ, and thanked him for the strong partnership between NATO and Colombia, and its contribution in building international peace and stability.

President Duque and NATO Secretary General also talked about Russia’s massive and unjustified military buildup in and around Ukraine. “NATO remains prepared to engage in meaningful dialogue with Russia,” said the Secretary General. “And the best way for Russia to demonstrate its willingness to find a peaceful solution is to de-escalate and withdraw their forces that are now threatening Ukraine,” he added.

“Every sovereign nation has the fundamental right to choose its own path,” the leaders agreed. The two leaders also discussed Russia and China’s growing cooperation, including their support for Venezuela’s repressive regime. “We agreed that all parties should play a constructive role in promoting regional peace and stability,” said the Secretary General.

To address global security challenges, NATO’s 2030 agenda for the Madrid Summit in June includes strengthening relations with like-minded partners around the world, including Colombia. Colombia provided a vessel to Ocean Shield, NATO’s previous maritime operation to combat piracy off the Horn of Africa, in 2015. More opportunities for interaction in the maritime domain will be investigated in order to improve naval interoperability and information sharing.

Colombia and NATO are attempting to develop common approaches to support peace and security efforts, including human security, with a particular emphasis on assisting in the implementation of United Nations Security Council Resolution (UNSCR) 1325 on Women, Peace and Security, as well as protecting children and civilians in armed conflict. 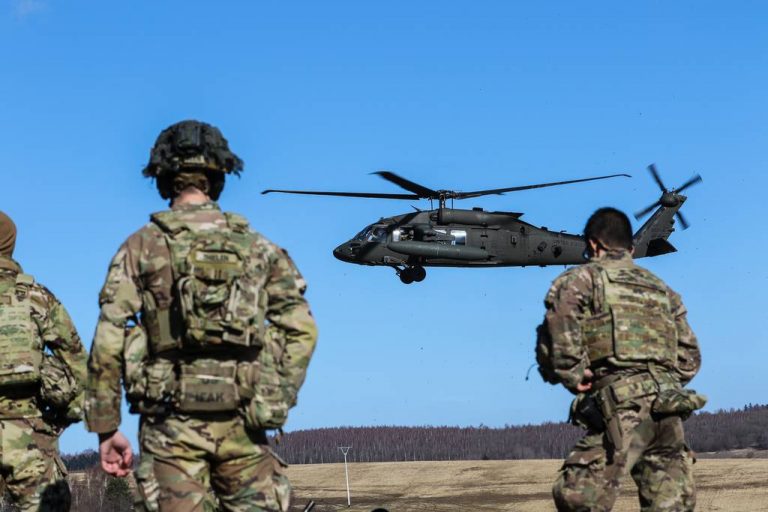 October 16, 2022
On Wednesday, the White House issued its long-awaited National Security Strategy, describing objectives for boosting partnerships across the world while preserving a strong American military “by fostering diversity and inclusion.”…